Psykosity
PSYKOSITY: Husband, Father, Musician (Guitarist), Composer, Producer, Writer, former Ordained Minister, cartoonist. Has the distinction of being banned for life from a major American University for 'accidentally" peeing on the Dean of Music's head. Hobbies include collecting the pocket lint of the rich and famous, foraging with wolves in the forest, and fishing for catfish with his teeth. ALL NAMES HAVE BEEN CHANGED BECAUSE I FORGOT THEM. 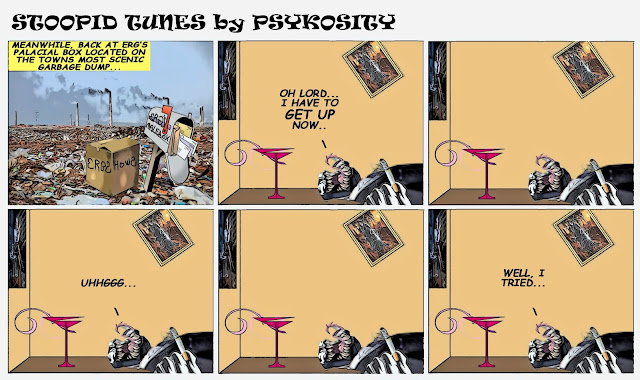 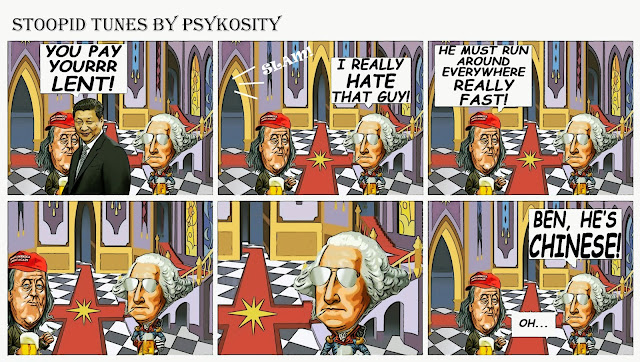 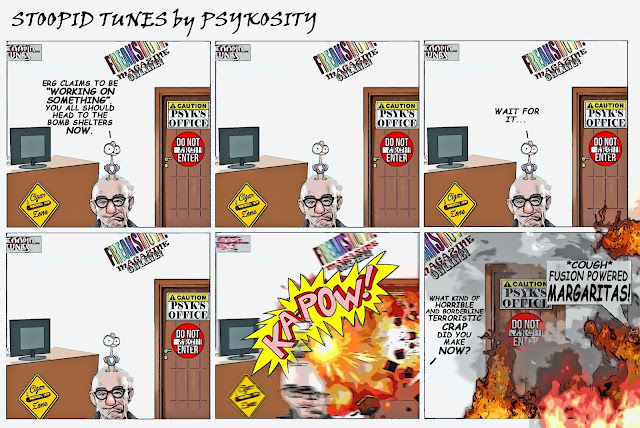 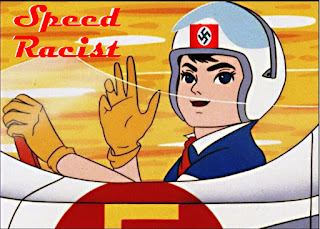 Posted by Psykosity at 3:52 AM No comments: 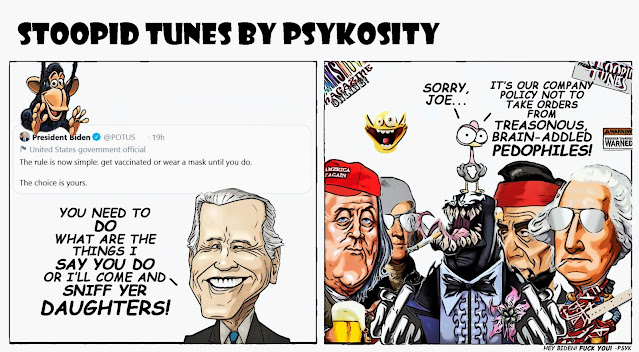 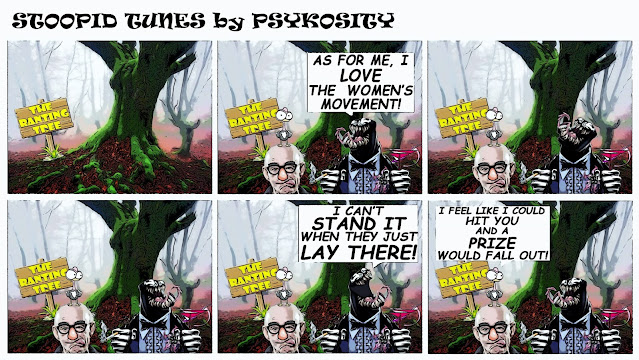 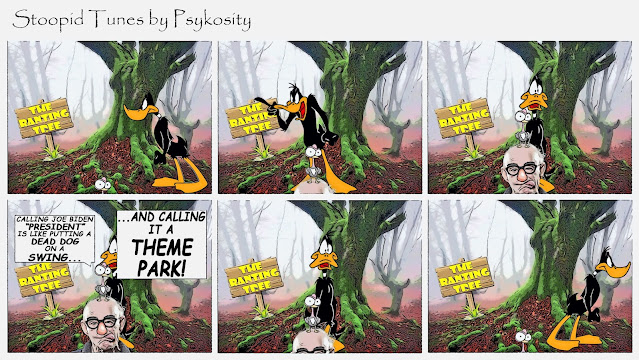 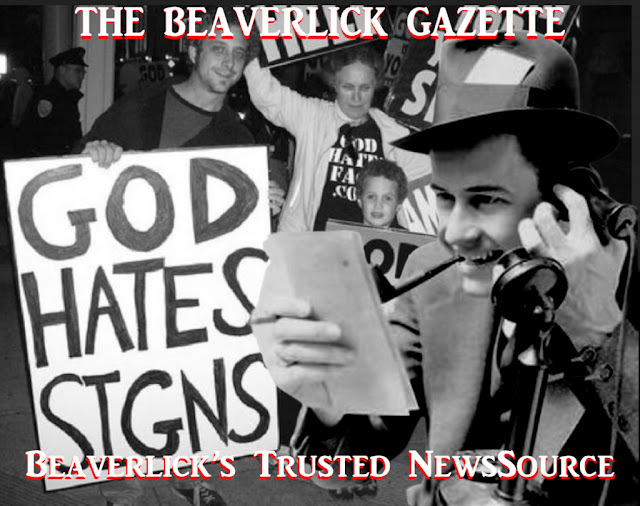 Local Resident Has More Beer Than He Can Handle

Just a week and three days ago, Lanceton Ocelot Binghamstring the Third, 37, of 4237 Twitface Court here in Beaverlick, stepped out of his front door and into history and, once he had wiped off all the history from his shoes, got into a horse drawn cab. Then, Lanceton promptly got out of the cab as soon as he realized horses can’t draw and Beaverlick hasn't had horse drawn cabs since Mildred Zwacknacker got married to her first husband.

Lanceton was having a lot of problems getting to work that morning, and he well knew that three warehouses full of Binghamstring Novelty Candlelit Toilet Seats weren’t going to sell themselves, so off he walked down the road and into Eternity.

Lost in thought, as he was, trying to determine where he went wrong with his life (which probably started to go downhill the day he married Cyndy Loo (“The Hammer”) Fatcell, former Miss Beaverlick and current Full Contact Plate Spinner…) when, for no reason at all, he was instantly killed by a beer truck driven by Grunt Breakneck, who was incredibly sorry enough about the accident  to try to save the life of Mr.  Binghamstring, though doctors today would certainly debate the lifesaving technique of attaching car battery leads to a dead man’s privates and stomping on his head shouting “WAKE UP, MAN! THE COPS ARE COMING!”.

Mr. Binghamstring was of indeterminate age at the time of the accident until Dr. Regis Fugue, who was charged with performing the autopsy, counted the rings of Mr. Hamstring’s torso, and that’s when it was revealed that Dr. Fugue was a tree surgeon, whereupon Mr. Binghamstring was taken to the offices of Dr. Beauregard Havenshlitz at the Havenshlitz Medical Center and Truck Repair, who declared Mr. Binghamstring was deceased by virtue of the easily recognizable signs (to  Dr. Havenshlitz, who is Beaverlick's most talented Truck Mechanic eight years in a row!) of having been run over by a beer truck.

Dr. Fugue was told to stop operating on human patients and to un-pot Mrs. Zwacknacker.

Services for Mr. Binghamstring will be held at the Dale (“Boy Howdy”) Blint Memorial Funeral Home and Spatula Museum just as soon as Dale can remember where he put the keys to the liquor cabinet.

(Editor's Note: The Beaverlick Gazette would like to assure its readers that NO ONE ELSE contributed to this story.) 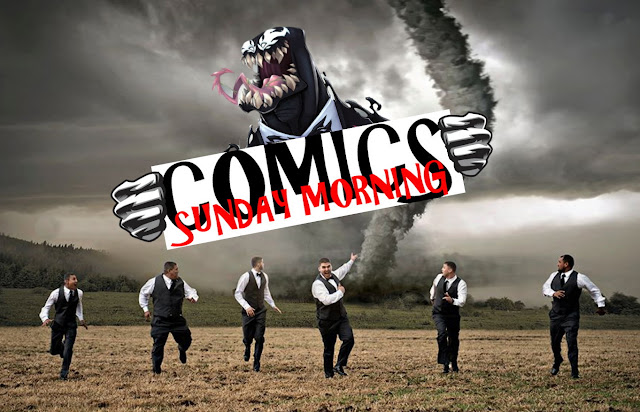 Posted by Psykosity at 1:54 AM No comments: 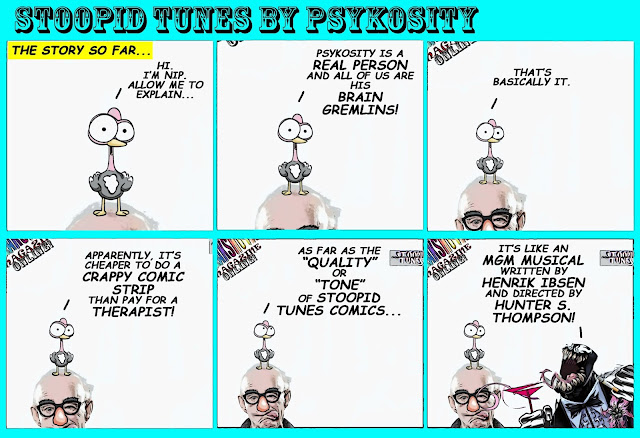 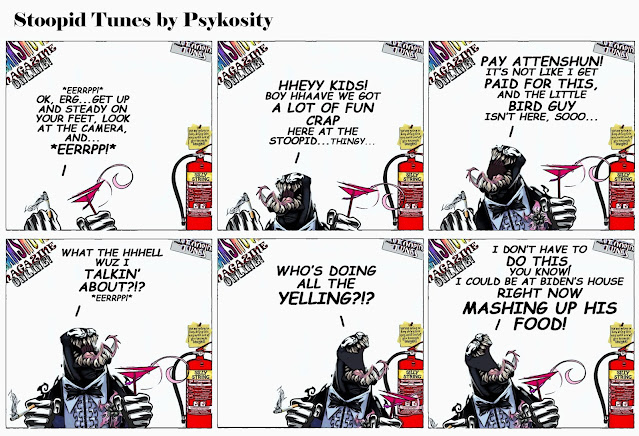 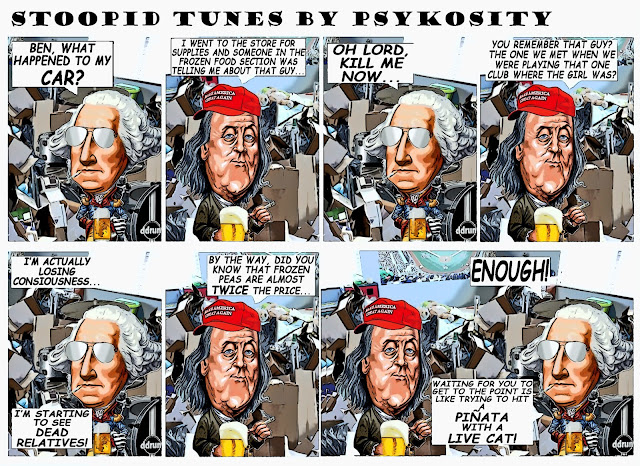 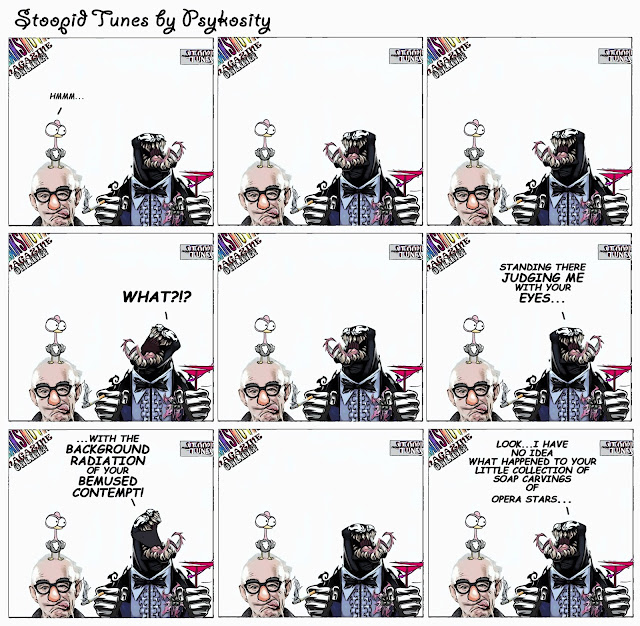 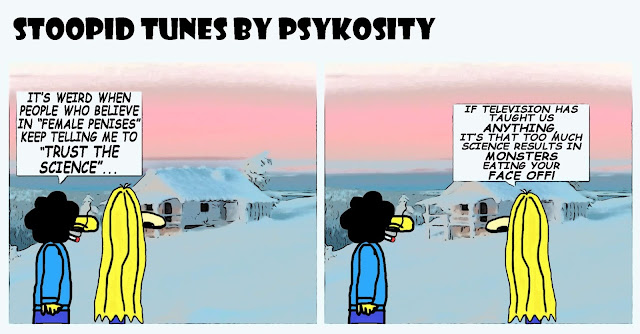 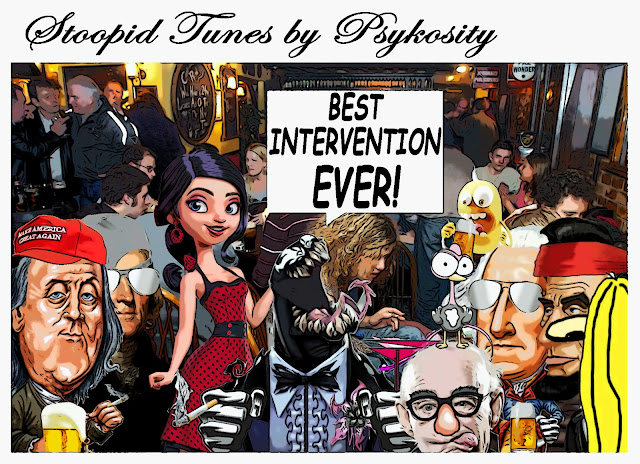 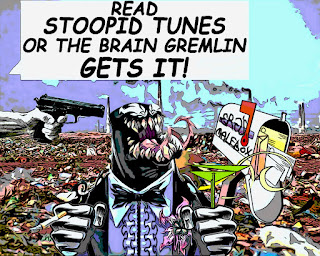 Posted by Psykosity at 3:30 AM No comments: 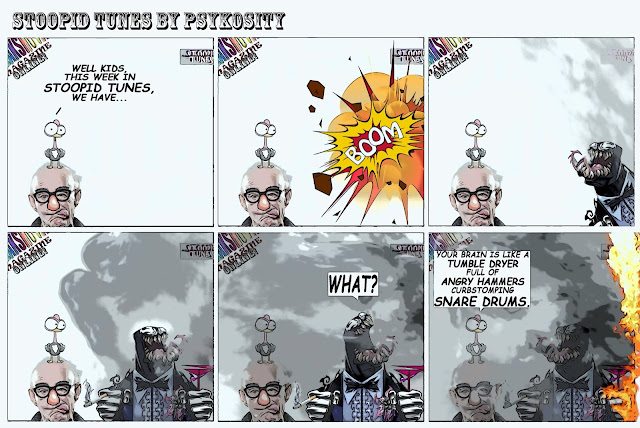 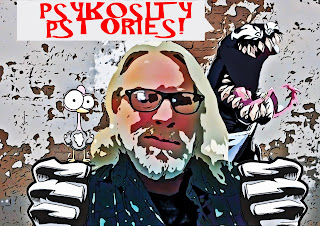 Don Quixote and The Windmills Of My Mind

(Editors Note: I wrote this 3 days into the Pinko Pox "Crisis" and I am publishing it now because A) I just found it in the computer files, read it, and liked it, and, 2) I find it interesting to read it now after over a year of the ongoing Real-Life Freakshow...)

What do you do when you want to write something…ANYTHING…but sitting down to actually put the thoughts in your head into words on the screen makes you physically sick?

I am so over this whole COVID-19 virus, or as it is known here at the office, the “Pinko Pox”. I am tired of being lied to, I am tired of watching the incompetence, the political finger-pointing and the disgraceful maneuvering of politicians creating fear and using that fear to take away the rights of the people, and I am disgusted and heartbroken over the behavior of most of the people of this nation during a crisis.

Where I live, which is just outside the city limits of a very small town deep in the Midwest, we are in day three of the madness. The little grocery store in town is in the second day of having its shelves stripped bare. Two days ago, it was just most of the people in town following the pathetic pattern of the rest of the nation: toilet paper and hand sanitizer, flour and bottled water.

Today, we have people coming in from the nearest city helping the locals empty the store. The looks on their faces, a mixture of fear, ignorance, and the grim eyes of a dog that lives its life tied to a tree in someone’s backyard, is understandable. We have been dumbed down and divided. We have been indoctrinated and have had our brains filled with propaganda.

What has it gotten us?

A Constitutional Republic and a Capitalist system of Economics are only successful when the people of a nation that subscribes to those ideologies are intelligent and educated enough (especially in the areas of history, civics, and basic economics) to take the principles found in those ideologies and make them work. This nation, that was once bright and shining, prosperous and proud, has become a nation of sheep, the colors have faded, the light is dim, and now we are slaves.

I said this was going to happen. I said it in print, and I said it on video. Why would I want to write about it NOW?

So- I smoked a bowl of ‘medicine’ and had a few cocktails. I kept my pinkie out the whole time, so everything was classy. Then, after some deliberation and a few minutes to make a sign, I rolled the Chair of Peace (my electric wheelchair) into town.

I had a flask of bourbon and a one-hitter full of ‘medicine’. The sign I made up: “THE END IS AT HAND! REPENT!” was taped to the back of my wheelchair with duct tape. I was wearing a Frankenstein mask, one of those rubber ones that cover your entire head. Finally, I had jams. In the portable stereo I have on the Chair of Peace I started blasting Frank Zappa’s “Jesus Thinks You’re A Jerk”, and I hit the button on that sucker as soon as I hit the town proper.

I went through the drive through at the smoke shop…strange there doesn’t seem to be a run on cigarettes…yet. The manager and I went outside, shared a smoke and a hit off the flask, and then I was off to our little grocery store. Just to sit there on the sidewalk overlooking the store’s parking lot with my Frankenstein mask, my sign, and Zappa blasting out of the speakers:

“Robertson says that he's The One

Oh he sure is, if Armageddon

Is your idea of family fun,

An' he's got some planned for you!

(Now, tell me that ain't true)

Give me that old time religion!”

If you live in a town as small as I do for over a decade, you know everyone in that town. You know who belongs there and who doesn’t. I could tell that most of the people filling the entire back bed of their pick-up trucks were out-of-towners. Most of them saw me. They all looked at me with dread, weariness, and guilt.

Deep down, they all knew that they were functioning on the level of broken animals. They could feel the chains around their necks. Still, apparently the only way you can get through a major pandemic is to grab as many bags of pizza rolls as you can get in your fat, hamlike fists, so you gotta do what you gotta do, right?

I finished my cigarette and disdainfully flicked it in the general direction of the stupid, and rolled away from the grocery store. I make it a block before I got pulled over by one of our local police. I knew him, and he knew me. He sat in the cruiser, rolled down the window…he didn’t even ask me to take off the mask.

“What are you DOING?” he asked.

“I ‘m getting a pack of cigarettes,” I answered.

“I’m making a statement,” I said, trying to scratch my forehead through the rubber Frankenstein mask I was still wearing. “That’s OK, isn’t it? I still have the Constitutional right to do that, right?”

He sighed and looked forward, knowing that any serious pursuit of this line of questioning would result in a shit-ton of paperwork that would ruin both our afternoons.

“You’re freakin’ people out,” he said.

I just looked at him.

“OK,” he groaned, “You’re freakin’ people out more than you usually do.”

“It’s not my fault the plebs don’t understand nuance.”

“Go home,” he said, shifting the police cruiser into gear. “I’ll stop by to check on you when I get off my shift.”

“ASPIRATIONAL ARTISTIC EXPRESSION IS LOST ON THE IGNORANT!” I shouted as he roared off.

I put on Son House’s version of “John The Revelator” and rode the Chair of Peace out of town.

“Who's that writin', John the Revelator

Tell me who's that writin', John the Revelator

Well who's that writin', John the Revelator

Wrote the book of the seven seals…” 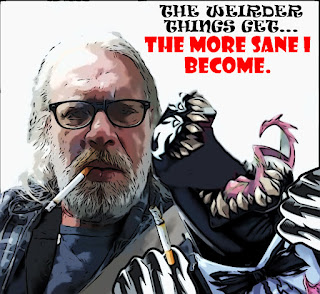 Email ThisBlogThis!Share to TwitterShare to FacebookShare to Pinterest
Labels: The Angle Of The Dangle
Older Posts Home
Subscribe to: Posts (Atom)